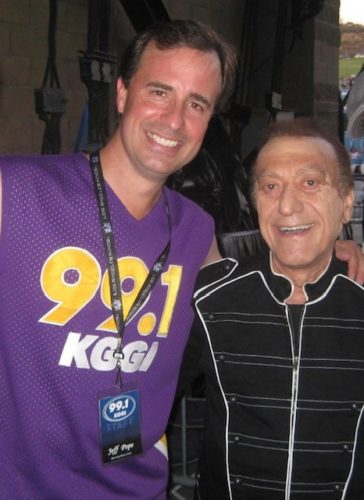 If you grew up listening to the radio here in the IE, then you’ve no doubt heard of legendary radio DJ Art Laboe, who passed away Friday Oct. 7 at the age of 97.

He was not only a great radio personality for nearly EIGHTY YEARS (he was technically in the business for an amazing 79 years), but he was a wonderful mentor to ME, and helped get my music radio career going.

After graduating from Cal State San Bernardino (GO YOTES!), my first professional radio job was with a small sports station located behind San Gorgonio High School. KMEN 1290 Sportsradio!  I mostly did sports updates on the air, as well as hosted some call-in sports talk shows, and did play-by-play of various high school football games.

Eventually, our station moved to Riverside (in the same building as 99.1 KGGI), and things seemed to be going well – until management decided to surprise us sports guys one Friday night by telling us employees that, starting on Monday, we would NO LONGER be doing sports!

Instead, we would now be playing “KILLER OLDIES.”  And since I had a disco show in college, I managed to keep my job.  Most everyone else was fired.

After making the somber drive from Riverside to Upland (I was still living with my dad), I went in the house – where he could tell something was up. “Who pissed in your cornflakes?”

“Yeah, I still have a job.  What do you know about Killer Oldies?”

“Oh WOW!  Killer Oldies?!?  Are you talking about Art Laboe?  I have ALL of his Oldies But Goodies!” And he happily showed me his music collection, with a bunch of Art Laboe CDs and records of songs that he would often play.  And we started listening to all these songs, and I practiced talking out of the songs and talking INTO the songs (gotta love that 28-second intro to Betcha By Golly Wow by The Stylistics)

So when Monday rolled around, I had a bettter idea of Killer Oldies than I did going INTO the weekend.  I proudly walked into that radio station with my dad’s CDs and records, and a brand new radio identity.  I was no longer “Jeff Pope, sports guy,” I was now “The Popester.”

A week after the format change, Art Laboe HIMSELF drove to the radio station.  Okay, he didn’t actually DRIVE to the station – someone else drove HIM. He arrived in a limo.  He arrived EVERYWHERE in a limo – and he was the absolute nicest celebrity I’ve ever met.  We sat down, and he asked about my background in music radio, which was limited to disco music in college and one week of Killer Oldies.

Then he gave me some advice that not only made my show take off, but it’s something I still do to this day.

“PUT LISTENERS ON THE AIR.”

So after he shouted out our station during his Sunday Night Special show, I suddenly had callers requesting Confessing a Feeling, Don’t Let No One Get You Down, Smile Now, Cry Later…

And our station got RATINGS for the very first time!  WHAT A RUSH!!

Of course, I had to make a tape of my best shows with some of my favorite listeners who would call every night. 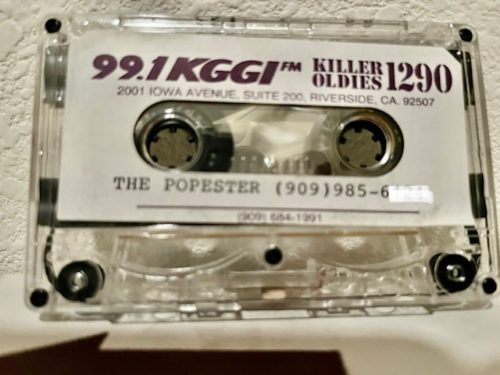 Fast forward several years, and now I’m doing mornings at 99.1 KGGI, where Art’s show was heard every Sunday night.  And we were fortunate enough to host several of his concerts at the Glen Helen Pavillion in Devore, where we’d get to hang out with him, and go out on stage in front of 20,000+ fans and introduce him to all of his adoring fans. 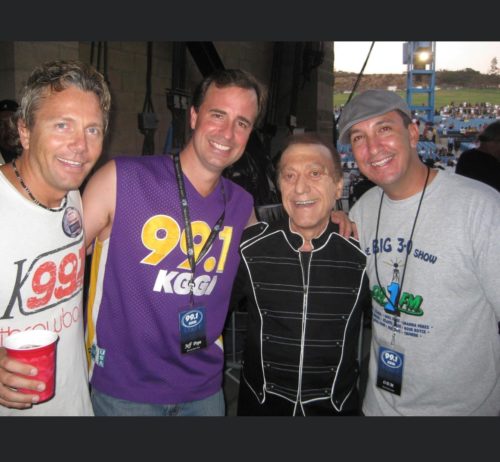 And YES, I was ONE of those adoring fans.  And I always made a point to THANK him for that sound advice he gave me, and THANK him for helping me get going in this industry.

He was much more than just a mentor – he was just a great person!  He touched SO many people over SO many years.

So ONE MORE TIME – THANK YOU, Art Laboe!  While you will be missed, you will NEVER be forgotten.

Made with ♥ by Vipology • Influenced By Radio